Writer by Chance, but Writer for Life 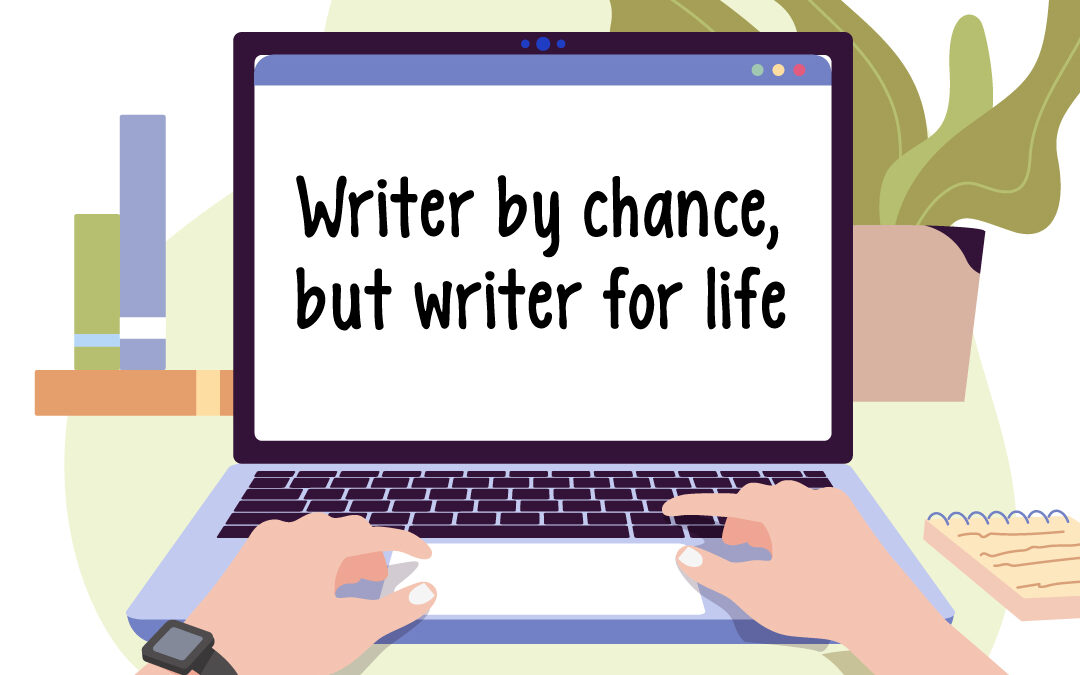 Alfred Hitchcock has allegedly said that every story must have a beginning, middle, and an end. But not necessarily in that order! The most interesting aspect of being a writer today is how your story can begin anywhere – anytime. Mine started about 15 years ago. It was partly by chance, partly by force, and a lot by sheer guts. A lot of people have asked – how, when, and why did you become a writer? How can I start? So here’s the story behind my stories.

Straight out of college, I began working in a plum marketing job, rubbing shoulders with the who’s-who of the Indian music scene. Bollywood to bhajans, every stalwart was on speed dial. As I was winding my wide-eyed way around all things glamorous, I was also given the task of writing promotional material. Left, right and centre, were press releases, music album sleeve notes, artist profiles, proposals, and what-not.

One fine day, we were releasing the biggest non-film album of the annual schedule. This was a ghazal album by one of the finest singer-lyricist duos in the country. As the master tapes started coming, the team was swooning over every twist of melody. The writing of very descriptive album sleeve notes was entrusted to a film journalist of repute. This was a very senior scribe who was on a first-name basis with artistes and was confident enough to get all the BTS nuances into his writing. Delays are always to be accounted for, more so when it comes to the filmy duniya. After much cajoling, we received the first draft of the sleeve notes a few days before the print date. Mind you, since this comes from a “senior” writer, the draft is only a first-and-final draft. You don’t get any changes. And you certainly can’t bargain on the hefty charges.

Well, the first draft was a disaster, at best. It was points, stray sentences, unconnected shoot-offs that ran off into 10-odd pages. It was basically just a writer’s notes. For which we paid in five figures. In advance. We didn’t know what to do next. Our lyricist-singer duo was upset; my boss and his brethren were fuming. But no one could bell this wayward cat. Cut to my boss handing me over the entire bunch of notes, emphatically saying – “Iska kuch karke do, kal print mein dena hai” I pride myself in being the quintessential Bangali, whose first love is literature and the art of writing, but this was really not my Bangali cup of chaa. I took to the task, switching between tabs on my humble desktop, swimming between lines that went all over, and trying to put it all down into text that had to be intelligible, impressive, and impactful. By the end of it, I was seeing double. Well, I was the double agent here, wasn’t I?

Handed over the whole file to my boss the next day. Everyone loved it — partly out of relief but largely out of true appreciation. In hindsight, I wish I had some concrete proof of this to save and show off. But truth be told, it was my writing that eventually made it to print. Here’s the cherry on the top – the byline was still the senior scribe’s! When I held the printed sleeve notes in my hand, I was first shocked, then livid! All of 24 years, hot in blood, I marched off to the boss with shrill accusations – How could you? He didn’t even write the damn thing! It’s all my work! Huff, Puff, Huff Puff.

I give due credit to him for being calm through all of this. He just said, “Of course, we can’t put in your name, Anushree. His name adds value to the whole project.” Was I stung? Of course. Was I right? Not entirely. It was my first indignant introduction to ghostwriting. And it left me rather pale.

What did I do next? I determined to see my name in print for the writing I had done. I wasn’t going to be a pallbearer to my name burial. I took a bunch of about 40 magazines to my desk – across genres – and wrote to each and every editor asking for work as a freelance writer. My bosses were generous enough to allow me to do this along with my full-time job. All I had in my quiver were a couple of press releases and an artist profile or two. Yet, I emailed away. Out of 40, 1 editor wrote back. She needed someone to review the latest music releases for the in-flight magazine she was editing. I immediately agreed and started writing. And so it began – my name in print, month-on-month, in a very reputed airline’s magazine — elation of the highest order.

From then came more work, more published additions to my portfolio, and a greatly rewarding journey of 15 years and counting. I’ve written on food, music, arts, architecture, travel – all from a passion that comes only from the heart. I began “Write Now: Writing Workshops” with the intention of egging more people to take up writing – for passion and as a profession. It’s a work possibility that’s always trending and always viable, no matter where you are. Many junior writers ask me how to start, where to begin, and all I tell them is this entire story. This story is about a change of heart, a heart that then sets the mind and the mind that then sets the direction of life. When I believed so strongly in my work and in my talent, no setback was enough to take that belief away.

About the author:
Anushree Chatterjee
Reader, writer, ranter – Anushree is all of these, though not always in that order. A creative soul who’d rather hold a book than a Kindle. Over the last 15 years, she’s been associated with leading brands and publications as a writer and editor